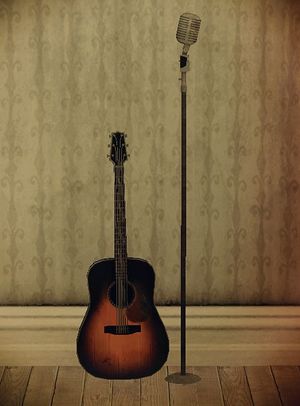 Vocalist Melanie Thompson: Melanie began singing in church at the age of ten in the small town of Whitwell,Tennessee. At an early age she took every opportunity to share music with whomever would listen. Growing up to the sounds of Elvis Presley, Gordon Lightfoot, Jim Croce, Alabama and many more in her childhood home. At an early age she found it easy to sit and share a musical story with people. In her musical travels of over 20 years she has shared many stages big and small and in those travels she has met and continue's to meet so many friends along the way.

Guitarist Bill Thompson: Bill cut his path throughout the greater Chicago and Milwaukee area venues,  including The Brat Stop, Cubby Bear, Double Door, Elbo Room and Buddy Guy’s Legends. He has opened for such notable acts as RATT, Cheap Trick, Eddie Money, 38 Special, Fog Hat and Enoughs Enough to name a few. Bill is accomplished in many styles of music including classical, rock, jazz, and country all which have helped him formulate his individual sound. With over 20 years under his belt he has the ability to leave a lasting impression with audiences.